Figured I'd pop in and give this place a much needed update.

Things have admittedly slowed down on the production side of Volume 2. There could be a pretty exhausting list of excuses, but they all pretty much point back to one: I've been busy.

I'm now two months behind where I wanted to be at this point in the game, mostly working on buying the time I'll need to actually keep working on Volume 2.

The good news? I'm reaching some sort of light at the end of the tunnel. I have a few more projects that need tending to (the kind that actually pay bills) and pretty soon I should be able to kick things back into gear with Bonnie Lass.

That's not to say that the property has grown stagnant! On the contrary, I've recently gotten some new exposure for Bonnie, what with con season starting up. Word of mouth (and Twitter, and Facebook) brings in new fans when I least expect it.

What I'm really looking forward to is getting started on issue three of the second volume—nothing wrong with issue two (in fact it's pretty exciting if I say so myself!) but I ran into this unexpected hiatus near the end of that second issue and it's certainly not helped the momentum I had going. Starting fresh with a brand new chapter ought to catapult me back into the swing of things—there's a certain rush from starting an issue from scratch and racing the calendar that is rather self-fueling. Poor issue two's been sitting on the assembly line since some time in February (back when I was ahead of schedule) and it's just hard to pick it up and get back in the same groove with all the other work I've got going at the moment.

So fret not! Issue two's bound to wrap up sometime soon, and once I get rolling on issue three, I'm confident I'll be able to at least compartmentalize the rest of the process along with my other projects so that I'm back to cranking out Bonnie Lass pages at something of a respectable rate!

Till the next update, have a little sketch of Bonnie that I worked up today!


Posted by Michael Mayne at 8:02 PM No comments:

Here are some recent doodles. Just continuing work on Volume 2. Some of this is purely hypothetical right now. 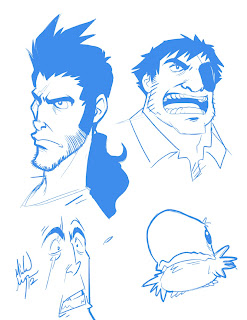 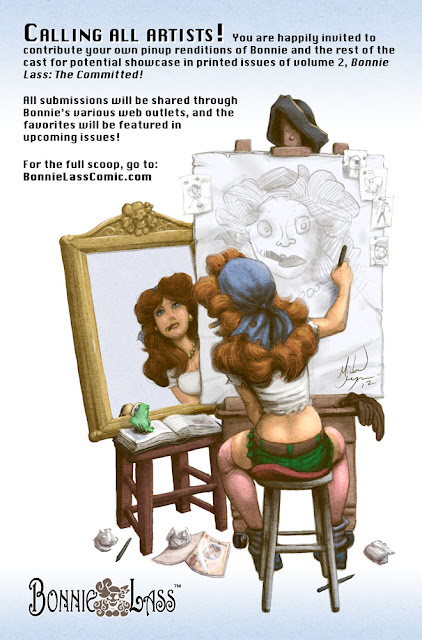 Production on Bonnie Lass: The Committed is moving along!
Are you an artist? Want to be part of the action?
Bonnie's looking for some pinup artwork to further embellish her adventures.
We're always eager to see new fanart, but now we're looking to showcase some of that inspired talent in the upcoming volume!
Any artwork we receive will be shared on the Facebook page and in a special gallery on the blog site, but some of the favorites may be exalted to the printed pages of Bonnie Lass: The Committed!
Read more »
Posted by Michael Mayne at 4:59 PM 5 comments:

Issue 1 of Volume 2 should wrap up within the next week or so!

Things are moving along quite well! I owe a lot of that credit to the convenience and intuitiveness of Manga Studio. Most of the processes have taken less than a week to do 22 pages each, and that stat is still blowing my mind…!

And since artwork and final compositing for that first issue will be done pretty soon, we needed to have issue two scripted so I'd have something to jump right into for Februrary (wondering now if I can beat the calendar and have artwork for #2 finished in 29 days; I'm thinking yes).
And as of tonight, I have a complete issue two script! Needs a little fine tuning, but it's got 22 pages of comic paced quite nicely, so there should only be a few wrinkles to iron out…

And with that, I'll leave you with a preview panel from early in the first issue of volume two (don't worry! Hoping to have an actual subtitle fairly soon!) which offers a WIP glimpse at how I'm handling the backgrounds in this arc. 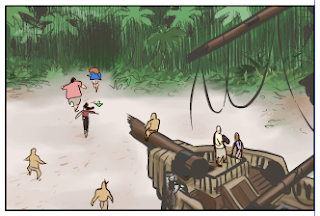 And one final word before ending this entry: Thank you to anyone who donated to Comic Creators for Freedom this year! I believe somewhere in the neighborhood of $7500 were raised, to help fight human trafficking!
Special thanks to Andrew Leslie (@dethfilm) of the Freakin' Awesome Network for interviewing me earlier this week and helping spread the word about the donation drive!
I look forward to being able to contribute to the cause next year, and I hope you will too!

Posted by Michael Mayne at 10:49 PM No comments:

I was interviewed this weekend by Andrew Leslie over at the Freakin' Awesome Network. That interview went live today, and you can find it here: http://www.freakinawesomenetwork.com/2012/01/comic-creator-interview-michael-mayne-comic-giveaway/

I'm questioned about writing a strong, female character, my participation in Comic Creators for Freedom's 2012 donation drive, and some of my karaoke standards, among other minutia!

There's also a giveaway. All you have to do is share a link to the interview on Facebook or Twitter (also include the hashtag #BonnieFAN for the latter) and you're in the running to win all four copies of Bonnie Lass: The Legend, signed by both Tyler and myself.
As an added bonus, Andrew will donate another $50 to CCF on Friday if you all can tally up at least 100 shares of that interview across Facebook and Twitter by then! So get crackin'!
Free comics? Helping out a great cause? You've got nothing to lose!
Posted by Michael Mayne at 12:14 PM No comments:

Readers of the first arc may recall that the main villain remained mostly enigmatic throughout the first half of the story. While he is briefly introduced to readers at the end of the first issue, he barely manages to squeeze in his intro to Bonnie and crew by the end of issue two. This is fine and dandy for how the story of The Legend progressed, but this time we thought we'd try something different, something more in-your-face.

So in volume two, issue one, we're throwing a couple of brand new adversaries Bonnie's way, and having her actually encounter them herself early on, in a sort of "good cop, bad cop" situation.

One of those characters is Rubens. I'll just tease you for now with a rough panel from an early page. Watchers of my deviantART page may recognize him from a few concept sketches from last year (and before that, he was originally a very early design for the character that eventually became Trick). Well, he's made it into the comic proper, so we'll all eventually get to see just what he has to offer!

Posted by Michael Mayne at 1:03 PM No comments: