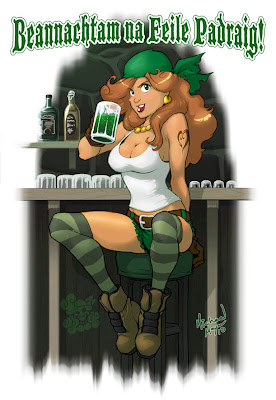 The coloring job on this beast took about 5 hours, I think. I don't know why. I did a little experimenting, but not too much, I didn't think... Oh well. 'Twas fun. And now I can officially say I was festive for St. Patty's Day...
Posted by Michael Mayne at 6:36 PM 2 comments: Links to this post

Boobs and beer... It must be Bonnie! 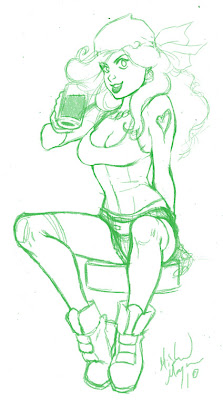 Just working on a St. Patty's Day pinup of Bonnie for an art jam over on deviantART. Between actual work on the comic and other stuff, ought to have this done by... St. Patty's Day, at the latest.
Posted by Michael Mayne at 10:57 AM No comments: Links to this post 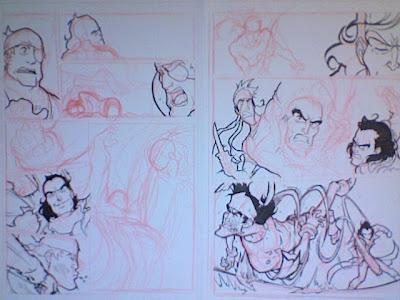 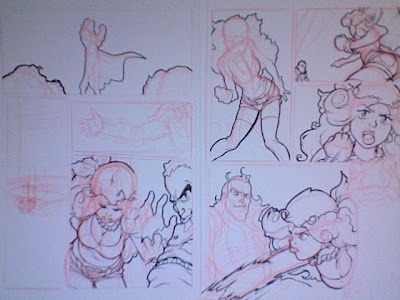 Yes, they're webcam snapshots. I told you. I just have no use for scanning them in right now because they're obviously not done.

You'll see that I'm being rather unconventional with my process (or am I? I don't know). No real order in which I work on any given panel (or page, for that matter). Basically, whatever seems like a fun subject to ink at the time, or whatever seems fastest, gets done first. So there are inks on every single page of roughs so far; there's just not one, single page in and of itself that is completely inked.

Also of note is that I don't really have a clean, pencil state. I just go from semi-polished roughs straight into inking. As a result, roughing takes a little longer than it would if they were literally "roughs," and inking probably takes a bit longer because I'm still technically making decisions on the composition of the lines. By skipping the pencils, I'm probably only saving about 10-15% of the time it would otherwise take. Actually, I'd say that's a pretty good number in the long run. Glad I just did the layman's math on that...!


And... I roughed (I believe) all of the above pages while re-watching the last few episodes of Gurren Lagann. You can tell. I inked parts of the top pages while watching Die Hard. You can't really tell.
Posted by Michael Mayne at 7:50 PM No comments: Links to this post

Upon trying to streamline the process of drawing The Officer Delgado (Bonnie's ship), the design itself has undergone some changes.

Over the two years that the project's been in some kind of development or another, the Delgado went from a bulky little fishing boat just barely big enough to carry the makeshift cabin on-deck (back then it was an RV), to a clunkier, bigger vessel, and from there a taller, leaner version (with a generic delivery truck replacing the RV as the "cabin").

Since the last major revamp, it's taken on a few minor tweaks, most of which I've felt were innocuous enough to slip in without retroactively going back to alter previous shots of the ship—going with the notion that over time the readers would remember certain details of the ship in pieces, and later when it's seen as a collective whole, the latest "version" of the ship is the definitive amalgamation of those sometimes contradicting details.

Those details have been slight enough up until now for me to feel comfortable leaving them be. But tonight while roughing and inking Chapter 3, I finally started to develop a more streamlined technique for sketching out the shape of the ship. In doing so, it makes the lines of the form really look a whole lot more appealing, but it slightly moves some of the details around.

Unfortunately, I don't think it's "slightly" enough. More on the "noticeable" end of the spectrum. So it looks like I'm going to be going back through some of the pages in Chapters 1 and 2 and touching up certain shots of the Delgado. Chapter 1 will be the chore; in Chapter 2, there are only a few long shots of the Delgado to begin with, and the ones that could use some adjusting really wouldn't require much at all.

The actual work doesn't really bother me (I'm just going to make all the edits on one new layer, over top of the other work layers); it's the waiting on the Photoshop files to load. Bummer...

In the end, it will be worth it. The Delgado will look a whole lot nicer (for a ship that's supposed to be a junker, anyway).
Posted by Michael Mayne at 1:01 AM No comments: Links to this post

The inks. They cometh.

So I've been inking Chapter 3 (rather casually) for the last two or three days. Still have 5 pages of roughs to get to, but I ran out of Bristol paper on Thursday, so I need to get to Hobby Lobby and pick up some more.

So in the meantime, I decided to go ahead and get a jumpstart on the inking. I'd like to get about 10-12 more pages done this week, at least. That would put me past the halfway point on inking, whereupon I'd only need another week and a half to get onto coloring and lettering.

Chapter 3 is definitely moving along very fast (err... compared to Chapters 1 and 2; practically speaking, I'm probably only working about as fast as I would actually NEED to work to be professionally efficient). But, assuming I don't have too many other projects crop up in the next few weeks, I should be onto the coloring phase pretty soon!


I'll try and get some visuals up here soon, so it's not just wall after wall of text. Since I haven't done anything digitally yet, though, I've just had no need to scan anything in. Maybe some crude webcam snapshots will suffice... at least during the roughs/early inking stages...
Posted by Michael Mayne at 12:31 PM No comments: Links to this post

Nothing new to show, but the roughs for chapter 3 are more than halfway done. I even lessened the page-count, bringing it down to 30 pages. If all goes as smoothly as it has and I keep working as much as I can, I'll have the roughs done in less than a week!

I'll try to expedite the inking process as much as possible while keeping it from deviating from the look of the first two chapters.

Then coloring and all the other digital stuff should go a little smoother as well, since I'll be modifying the automated part of the process a little.


Boy, am I glad I went ahead and scripted chapters 3 and 4 at the same time! I'd say knowing that in the back of my mind has been motivating me a little more even during the roughing stage...
Posted by Michael Mayne at 6:36 PM No comments: Links to this post